Wishing everyone a very Merry Christmas and may 2022 be a happy and healthy one for all!

For the past few years we have been receiving fairly regular December visits by the white pelicans. They can and will arrive at other times of the year, but the marsh pond in December seems to be on their standard reservation list.

They generally don’t do excessive amounts of flying, most of their time is usually spent gliding through the water in search of a meal. This is the opposite of the brown pelicans who fly quite a bit and feed by diving face first into the water, landing with a head pounding splash!

These guys also tend to float and fish in tight groups, their scoop and swallow technique appears almost choreographed, so it must be successful for them!

There was also one Roseate Spoonbill in attendance today which is uncommon for them, but who knows? Maybe they will ultimately become year round visitors which would be a nice change. 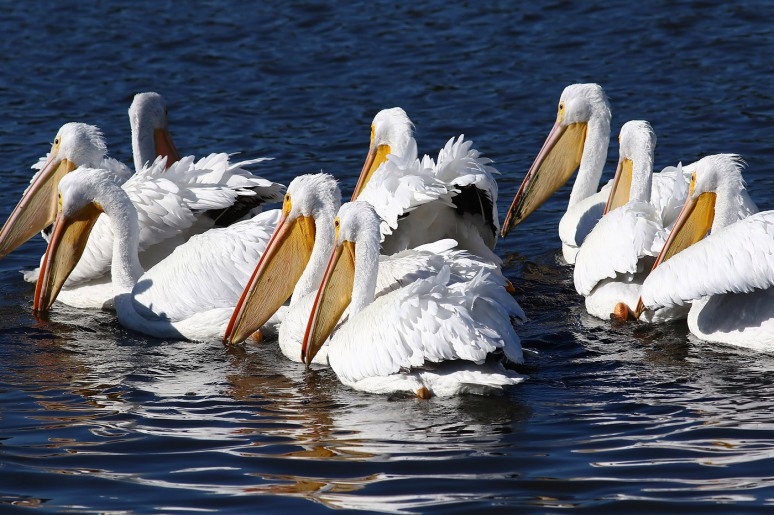 The Sun On My Back

I had forgotten I took this photo, I never posted it here, but apparently did email it to a friend who posted it on social media where it attracted a bit of attention.

In this case, the spoonbill is entirely back lit by afternoon sun, making the water so bright.

I’ll have to dig around, as I’m sure there’s hundreds of various photos like this I’ve completely forgotten about that have never seen the light of day!

Earlier in the salt marsh we saw a white ibis going through his wash cycle. He clearly chose Whitest Whites and Power Agitate!

There was also a spoonbill posing in front of an oyster bed which fanned out behind him.

Nice to see this pair out enjoying their day, same as we were.  🙂 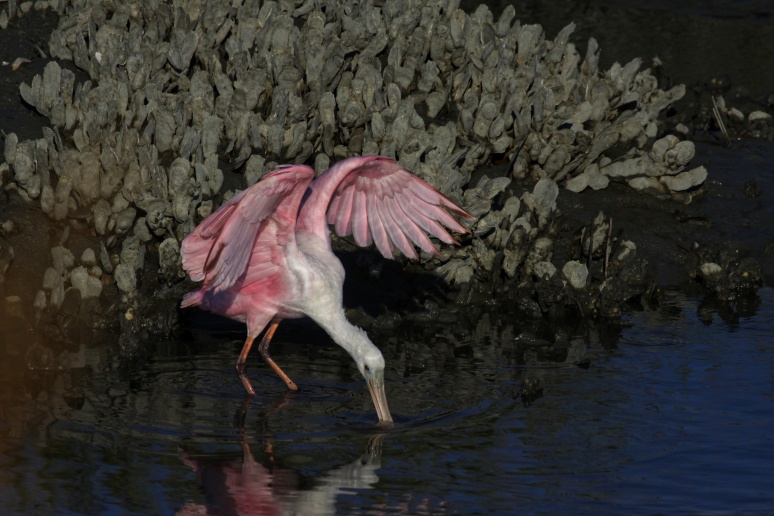 And Now…It’s Time For Something Completely Different

None of the usual wading birds and alligators today, instead I have a more unusual aspect of nature and wildlife to present.

We generally have a small garden with potted flowers just outside our back screened porch.

However, this past Spring we decided to try something different, and use plants that are known to attract butterflies, especially the Monarchs. These plants include milkweed and fennel, some of which we grew from seed, and we already had large pots of Mexican Petunias for the butterflies, bees, and hummingbirds to feed on. For the past month or so we began to notice an increase in butterfly traffic, some of which we hoped were laying eggs. A few weeks ago we began to see some scattered caterpillars among the milkweed and fennel and we noticed two types. The ones with spots and stripes we learned, were Swallowtail, while the Monarch caterpillars were just stripey.

It wasn’t long before we had our first chrysalis but not from a Monarch, it was a likely a Black Swallowtail, who it turns out, are partial to fennel. Soon though, we had Monarch caterpillars coming out of our ears. They are voracious eaters of the milkweed and within days had almost completely stripped the plants of most of the foliage. This required an emergency supplement of butternut squash this morning which the caterpillars also began to devour.

We also had an unusual sighting of a pale Luna Moth, which was exciting because they’re rarely seen during the day! It stayed motionless on a leaf for a couple of hours before finally flying off. A Monarch who after emerging, will also stay still in one spot drying and stretching it’s wings before starting it’s new life.

So far, we have yet to see a Monarch chrysalis but expect to start seeing those soon. This entire process amazes us and is a true miracle of nature, when the caterpillar ceases to exist, and in it’s place, a beautiful, delicate butterfly will emerge.

Earlier I was watching this adult brown pelican flying circles around the marsh area during high tide.

I waited for a bit until the big guy came gliding in right toward me just above the water level. I wondered if he was using his wing tips to help judge the proper flight height. Humm…”Flight Height”, sounds like a great name for new flying app.  🙂

I did a quick stop over by the salt marsh this morning and there was a pretty good crowd of the usual suspects in the area. Great blue and great white egrets, white ibis, a ton of wood storks and a few alligators. But I only saw one young spoonbill who was fishing there in the marsh at low tide.

On the way out I also grabbed a shot of an anhinga that had just finished an underwater prowl and was now fluffing her feathers.

It was good to see a variety of wildlife all in the same area with one stop shopping! 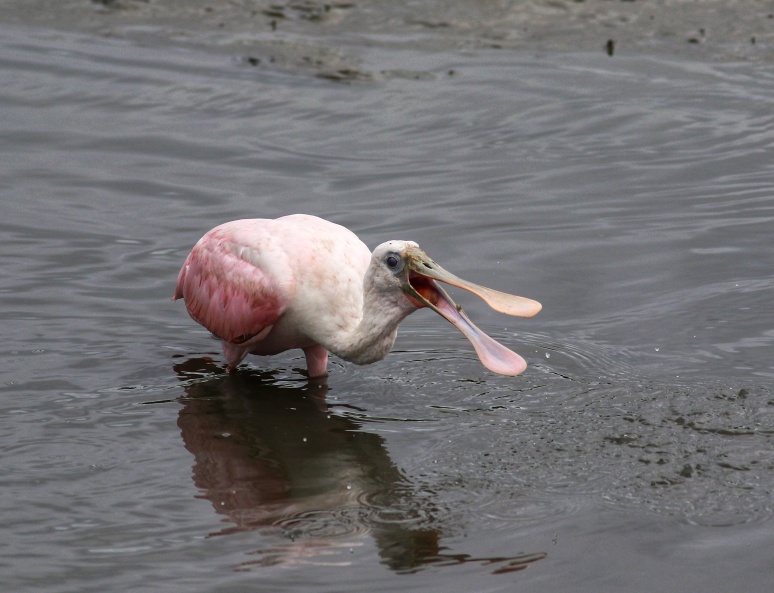 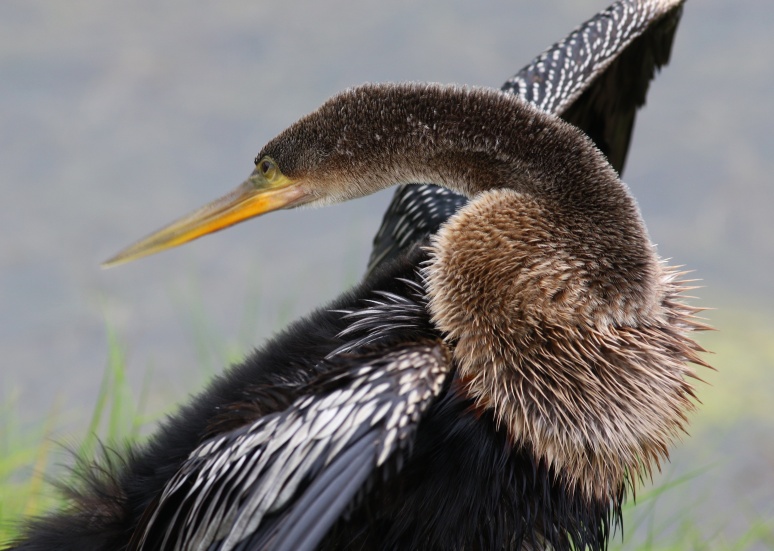 We have had several of our pink visitors coming and going in the area the past month or so, and you never know where they will show up.

Earlier we caught this one just as he was coming in for a landing in the salt marsh. Always great fun to see these colorful birds with their spatula shaped bills drop in! 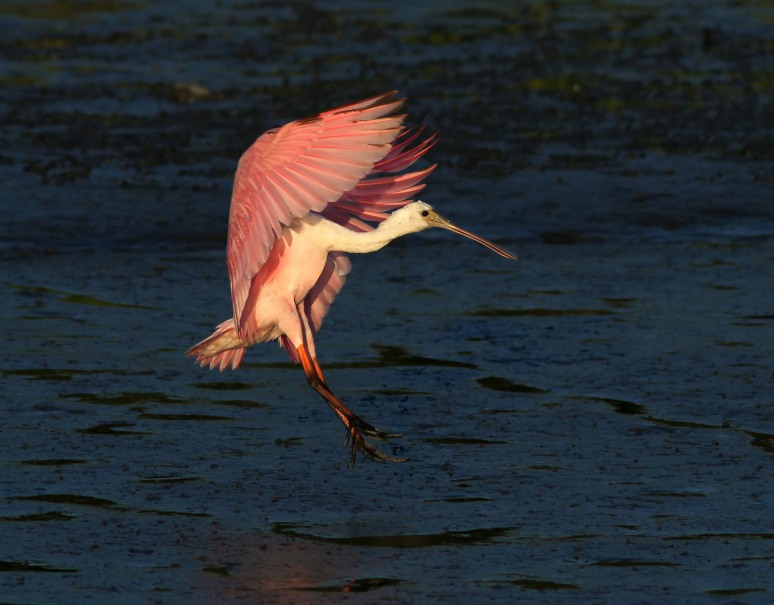 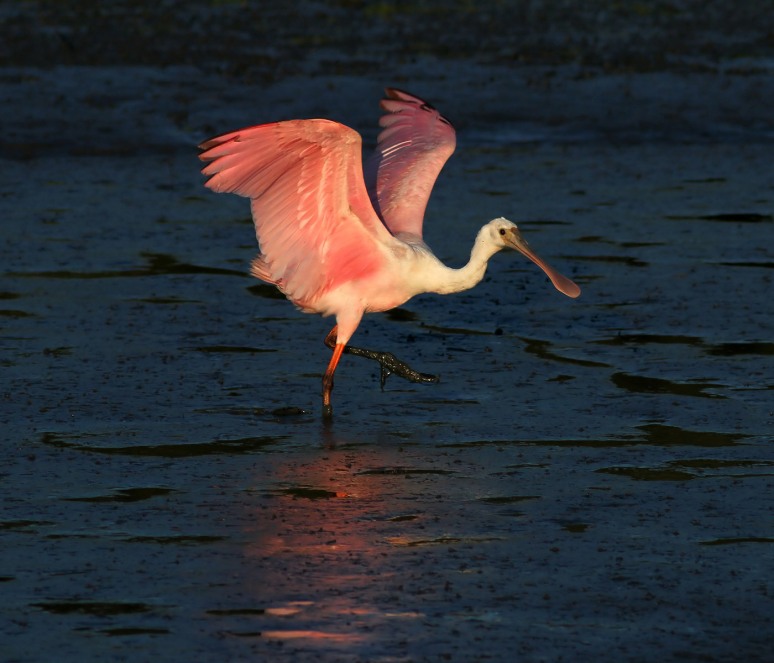